The FIA Extinguishing Council met on March 7th. What are they working on now?

When it comes to fires (remember those – burning hot orange things?), there are so many issues to consider.  Obviously the risk to lives generally, and we all know that if you splash enough water on a fire it will (hopefully) diminish.

But did you know that fires can continue to burn so long as they have access to heat, oxygen, and fuel?

The amazing thing is that if all three of those things are kept going, then essentially the fire will just keep burning forever.  Days, weeks, months, even years.  According to the Guinness Book of World Records, the longest burning fire has been burning for 5000 years.  5000?!  That’s even further back than the Romans. 5000 years ago, some poor blokes were trying to build Stonehenge with nothing but their grubby hands.  And yet this record-breaking 5000 year-old fire is still burning beneath Mount Wingen in New South Wales, Australia.  How on earth can a fire be as old as Stonehenge?

Revert back to modern times and it is perfectly understandable that there is now considerable research into how to extinguish fires.

Which brings me quite neatly to this week’s Extinguishing Council meeting at FIA HQ, here in Hampton.

The bustling hub of knowledge and expertise brought forth some lively debates between council members.  Extinguishing fires is a tricky business (why else would that fire in Australia have been burning for 5000 years?).

“The council is based around extinguishing,” explained Robert Thilthorpe, Secretary to the council, “so that is the manufacturers of extinguishing equipment, both portables and fixed systems.  So [it’s all to do with] watermist, gas expression systems, powder and foam extinguishers et cetera.”

Member companies of the FIA from across the sector are all here.  And they’re here to network, discuss issues in the industry, and hopefully find solutions.

Armed with mugs of coffee, a lively debate was sparked over changing a British standard in order to better test products that are used to put fires out.  Handy things to have around to stop fires… but only if they actually work.

“If we are going to improve the standard, we need to specify exactly what needs to be changed within the standard,” Robert Thilthorpe, Secretary for the Extinguishing Council stated.

Clearly the boundaries for best practise are up for some debate, but what was clear was that council members clearly wanted the best safety standards to be reflected within the products sold on the market.

It seems that although standards might be up for debate, one thing is clear: everyone is unanimous in wanting to improve standards in fire safety across the sector.

It’s all curious stuff – fire blankets, sprinklers, watermist, even fire extinguishers.  I always thought fire extinguishers just stood in a corner until you needed them, but today I learnt something that surprised me.  Foam fire extinguishers don’t just squirt foam on fires to put them out (and no they don’t have a secret hidden talent like being able to sing the Star Wars theme tune in its entirety).  Council members raised the issue that some varieties of foam have the potential to corrode away the inside of the extinguisher, essentially making the extinguisher a bit on the useless side, which highlights the need for annual servicing by a competent person. 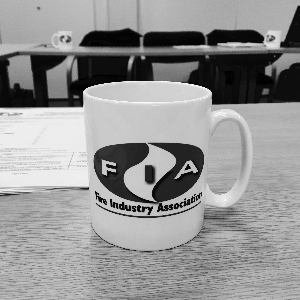 The science of it all reminded me vaguely of chemistry class back at school, and I had a bit of a flashback to a textbook being pushed under my nose whilst the teacher at the front waffled about corrosives.  But curiously, the Extinguishing Council are thinking of ways to address the problem.  Thoughts are aired and ideas are exchanged.

“Working Group Foam deals with everything to do with firefighting foams,” Robert explained to me later.  “In firefighting foams you have two main chemical types – one type contains fluorine, and others that don’t.  And the chemistry of these foams are continually developing to improve their environmental credentials. Older foam types -  when they break down, they form another product PFOA[Perfluorooctanonic Acid…] which is harmful to the environment.”

In simple terms: even your common or garden foam fire extinguisher has more to it than just hanging on the wall waiting for you to use it.  Fascinating stuff.  I wonder how many extinguishers it would take to put out that fire that has been burning for 5000 years… 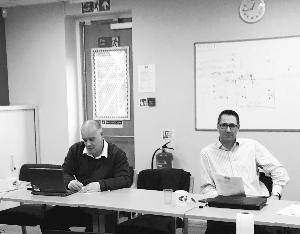