FIA teams up with University of Edinburgh in new study

Fire detection in large open spaces has often proved to be challenging.

BS5839-1 provides clear guidelines for detection at the ceiling and this may be perfectly sufficient for many applications. However, a few designers have been embarrassed to receive customer complaints of detection failing to respond to a fire despite the system being compliant to the code of practice. The cause of such poor performance can be attributed to stratification. This is where the fire has insufficient energy for the resultant smoke plume to rise to the ceiling because it has cooled to the temperature of the surrounding air and lost buoyancy; spreading out in a layer below where the detection is sited. 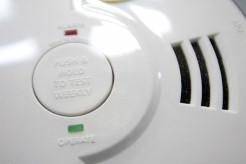 The challenge for system designers is to predict when and where stratification may occur.  In practice it is almost impossible to reliably predict the height at which the smoke layer will form because it depends upon the size & energy of fire and the temperature gradient in the protected space. This gradient can in itself be influenced by many factors such as differing weather conditions, time of day, building occupation, heating control etc.  As a consequence, it is often simply argued that as the fire develops; the heat output increases, hotter smoke will break through any thermal barrier and ceiling-mounted detectors will eventually operate.

In spaces, where smoke stratification is considered to be a risk, BS5839-1 (and other similar codes) has, for many years, recommended that a layer of several beam detectors is installed - spaced sufficiently close to each other so the rising smoke plume is unlikely to pass through the layer undetected.  In reality, this recommendation is rarely followed because the number of beam detectors needed is prohibitively expensive.  Instead, many designers, instinctively apply the use of angled beam detectors; in the expectation that they will be obscured by the smoke layer no matter the height at which it forms.

This alternative approach (using angled beams) was first included into BS5839-1 in 2013 but no specific guidance was provided as to where to place them because such an approach has never been fully researched.  Thus the Fire Industry Association launched a research project to investigate the effectiveness of angled beams and provide data to support guidance as to where they should best be positioned.

Using software called Fire Dynamic Simulator (FDS), the Fire Industry Association, in partnership with researchers of fire science at the University of Edinburgh modelled a series of fire scenarios in a 25m high space to simulate the effect of key variables such as fire size and temperature gradient on the characteristics of the smoke layer. 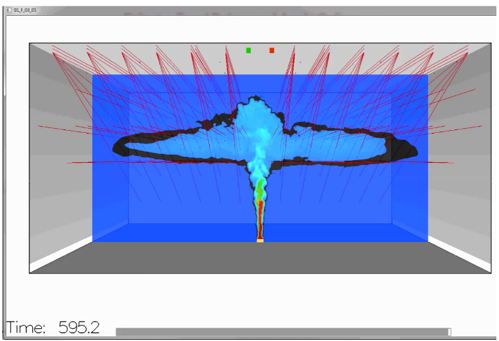 For those unfamiliar with FDS, it uses complex computerised mathematical modelling systems to simulate and predict the way that smoke travels and how it rises within a building.  Moreover, it includes models that can be used to predict the activation of smoke detectors (including beam and aspirating smoke detectors).  These models were fundamentally improved as part of the project to accurately model angled beams – of which there were over 100 included in the simulations.

As with all such analysis, the absolute accuracy of the results cannot be relied on until it has been verified.  Despite this caveat, the results provided useful insights into the relative performance of detectors in different positions and the visualisation afforded by SmokeView shed light on how the smoke layer develops.

The first finding was that the tight spacing (¼ height) recommended in BS5839-1 (for interstitial beams intended to detect the rising column of smoke) should not be relaxed.  For example, if the interstitial beams are installed at 12m they need to be spaced every 3m – requiring ~5 times more devices compared to the 15m spacing recommended for the ceiling mounted beam detectors.

The second finding was that the predicted response of angled beam detectors passing through a stratified layer of smoke (resulting from a small fire when there is a temperature gradient) is similar to the response of beam detectors positioned on a ceiling (to the same small fire when there is no temperature gradient to cause the smoke to stratify).  This was an important finding as it confirms that angled devices are likely to be effective.

One observation, which differs from common/intuitive thinking, is that the horizontal velocity in the smoke layer reduces as the layer spreads.  The research indicates that the layer does not continue to stretch outwards across the room indefinitely, but instead it tends to deepen around the centre and to become more dense. It is therefore important when considering a design with angled beams that consideration is given to the extent (and speed) of the spread of the smoke layer. 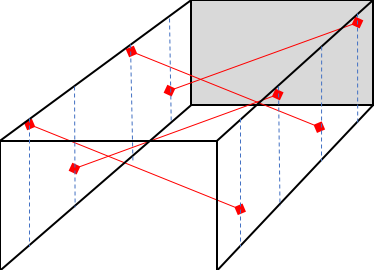 The findings thus far are reflected in the current advice in BS5839-1 for installing angled beam detector – particularly in the note under clause 22.5 d).

One additional recommendation from the research which has not been reflected into BS5839-1 yet is that when installing angled beams they are best deployed in a criss-cross arrangement (see diagram). This is intended to ensure that the distance to a beam at any height is not excessive.

From this short overview of the research underpinning the current recommendations for angled beams it is clear that further analysis and validation is needed.  In anticipation of this the FIA has agreed to sponsor a second phase of research into the challenges of detecting stratified smoke.

The Fire Industry Association, the UK’s largest trade association in the fire protection sector, not only contributes to writing best practice guides and revising British Standards, but also is a powerful investor in scientific research into the behaviour of fire and a wide range of other issues including smoke detection and the capabilities of fire detection and alarm technology.

This project was sponsored by the FIA in conjunction with Laluvein Consulting Ltd, Fire Fighting Enterprises Limited, and Xtralis (UK) Ltd (part of Honeywell).  The FDS modelling was undertaken by Ben Ralph from University of Edinburgh, Fire Safety Engineering.

To learn more about optical beam detection, visit the ‘Resources’ section, where a vast technical digital library can be accessed.

This article was written by Robert Yates, FIA Technical Manager, and Peter Massingberd-Mundy of Xtralis, a member company of the FIA.  Peter attends the FIA's Fire Detection and Alarm Council along with many other representatives from Member companies to find solutions to technical issues on behalf of the fire industry.

The FIA provides the springboard between industry and research at top Higher Education institutions, providing the industry with solutions and guiding Standards with scientific evidence.  Our research also helps lead our training and qualifications in fire detection and alarm systems.

Learn more about our qualifications>>