Boys (and ladies) and their toys!

I was lucky enough to get an invite to the joint FIA/IFE event hosted by the Gatwick Airport Fire and Rescue Service on Thu 17 Dec, along with other FIA colleagues and FIA/IFE members as well as eight staff from Surrey Fire & Rescue.

The day started with the usual security and pat downs to get to the airside part of the departure terminal at the South Terminal. We were given a very informative and lightly humoured tour of elements of the terminal by Roger Gentle, responsible for the fire safety management for Gatwick Airport and Simon Petts, the Fire Station Manager. 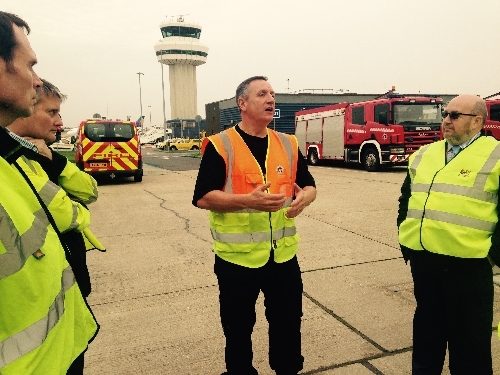 Roger explained the various issues they have with managing the fire systems plans and having a throughput of up to 80,000 passengers in a day and how the various restaurants and eateries have to simply write off any profits if the terminal is evacuated as no one plans on returning to settle their bill!

One person attending asked about contractors on site and using Oxy-Acetylene. Roger’s reply was simply….”no”. On the very rare occasion this equipment might be allowed the rules are strictly enforced and staff supervised for very obvious reasons that even a dullard like me could understand…. If there is a way to do works and avoid using such equipment and oxy-acetylene, then they will find the alternative methods to do so. 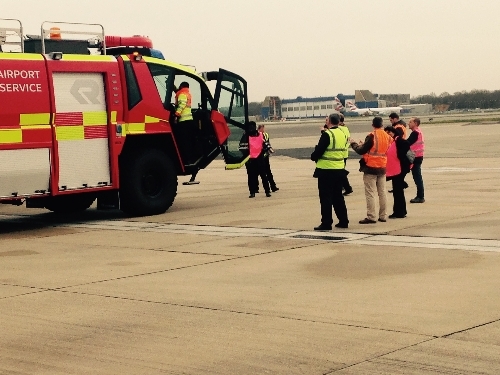 Next time I go through Gatwick, my wife will probably wonder why I am looking up to the ceiling fittings and roof voids on our way to the plane!

From the terminal we were driven down to the airport fire station, pretty close to the main run way it has to be said…

The duty crew took us around their fleet of Rosenbauer Panther fire vehicles, and their standard Fire Tender, explaining how they work, water and firefighting capacities and loads of kit that county FRS would apparently die for! We all cringed slightly as the mobile access steps vehicle was driven from the garage, with about 3 inches to spare between the top of the stair case unit and the top of the roller door…

Post a quick lunch in the station, we were back on the bus and escorted down the “Northern” runway by one of the Panther engines, doing a circuit around the emirates A380 that had pushed back for departure and a loop around the ANA Star Wars plane that was parked up too… cameras and phone cameras clicking away by quite a few on board.

After a drive down the northern runway and a window screen wash from the main water cannon enroute, we pulled into the firefighting practice area, with various ISO 20 foot containers in some strange configurations and one pretty huge aircraft shell for fire crew training! 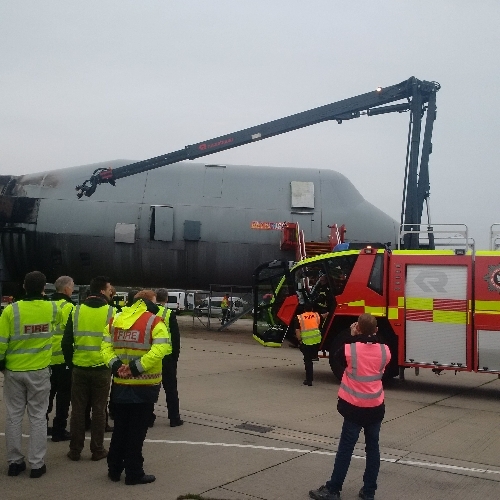 At this point we also came across two fire tenders and crews from Surrey FRS and one person quietly asked if anyone was actually providing fire cover for Surrey this day, to the expected chuckles from everyone else, including the Surrey colleagues with us. They were making use of the containers for various training scenarios.

As well as the two Panthers, we were joined by the very large and very flexible Panther that has an extendable boom fitted that can reach over the other side of an aircraft, with the ability to spray foam and water. It takes two minutes to empty the 12,000 litre tank!

At this point one of the crew took five people at a time on a short tour around the training facility and its outer boundaries in one of the Panthers… everyone coming back with “I’ve been on a fire engine” grins. Kids all round it seemed… and it gave the station crew guys a chance to show off the pretty extraordinary ability of the engines to take corners at a fair speed for their size… 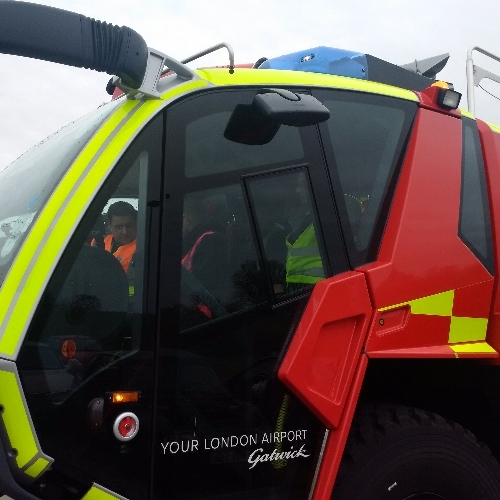 Whilst the “Fireman Sams and Samanthas” were trucking around, others were taken inside the large aircraft training facility… to say it was dark inside would be a slight understatement… we were lucky to have minimal emergency lighting, which the fire crews do not have when they are doing their drills and training… it does give someone like me... a non-fire industry person, a new perspective to the problems the crews could potentially face dealing with aircraft fires or evacuations… and on top of that, fully kitted up with their breathing apparatus, masks, helmets and protective clothing….

The station staff went to “ignite” the gas to start a fire on the aircraft facility… but this did not work, it would appear the gas levels were too low and the computer said “No”, we all offered a pound or 2 for the meter… but this did not spoil the day at all.

By now the time was 3.45pm and it was time to head back to the drop off point, again escorted by one of the Panthers to the gate then off the coach and back to cars, trains, or in one case, a short walk home from there!

At this point, I’d like to thank the FIA General Manager, Martin Duggan for pulling all of the logistics together for the day and for someone like me, new to the fire industry generally, it was a day well spent and very informative too.

*Kevin Stearns, FIA Compliance Manager, joined the team in October 2015 and filled in when a delegate dropped out at the last minute. This was a CPD day called ‘London’s Airports’ and was last in the 2015 series of four CPD days arranged with IFE London Branch.