Given that the average fire person I meet is male, 50+ and technically qualified it’s likely that they may not have come across the 50 Shades of Grey phenomenon – so to avoid the crowds they’d better stay away from the cinema as the movie opens on 13 February.

Given that the average fire person I meet is male, 50+ and technically qualified it’s likely that they may not have come across the 50 Shades of Grey phenomenon – so to avoid the crowds they’d better stay away from the cinema as the movie opens on 13 February. And if they need to visit a hardware store this weekend they might be crowded – but more off that later!

So what is 50 Shades of Grey – well Wikiwotsit describes it thus: 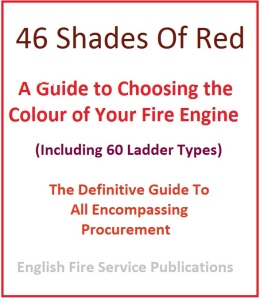 But wait it gets better as Wotsitpedia goes on to say:

So if you’ve read this far the blog now gets more boring – no special rope knots, code words or Marquis de Sade references (must take that book back to the library!) but a veritable Kama Sutra (that one’s due back as well…) list of fire connections!

But these fire connections are not to be confused with that well know best seller “46 Shades of Red” – the English Fire Service Guide for Fire Authorities that still have some money to buy a fire engine or “60 Ladder Types” the annex to the former about the number of ladders needed.

The fire connection that I liked best came from Plymouth firefighters who are urging people to practice safe sex this weekend – by remembering where they put the keys to their handcuffs! And it’s not just Cornwall as those West Country people also have advice from Devon and Somerset FRS who say that “the key is to make sure you have an escape plan" – Is that the same key as for the handcuffs?

So I’m dusting down my passport and making sure that the Bristol customs don’t find the cable ties and rope I’ve got in the car for a trip to the saucy West Country this weekend  and believe it or not my car is Steel Grey in colour so I must be in with a chance of some fun that is if I don’t get tied-up (gedddit) in a jam on the M5. If I drove further north I could use the M50 (again geddidit!) but that could be a bit crowded with people heading to B&Q who have allegedly provided their staff with copies of Fifty Shades of Grey (the libraries will be quiet...) to prepare for an increased demand for ropes and duct tape after the film's release.  (For those male, 50+ and technically qualified this is the hardware store reference…)

Should of course English fire and rescue services visit B&Q they could be in for a disappointment as the store only stocks about 15 shades of red paint and most of them aren’t suitable for a fire engine!