Grenfell Tower: How will it affect the fire industry?

Video discusses the aftermath of the Grenfell disaster

Ian Moore, CEO of the Fire Industry Association presents this panel based seminar about the Grenfell Tower fire and the lasting effects on the UK fire industry. 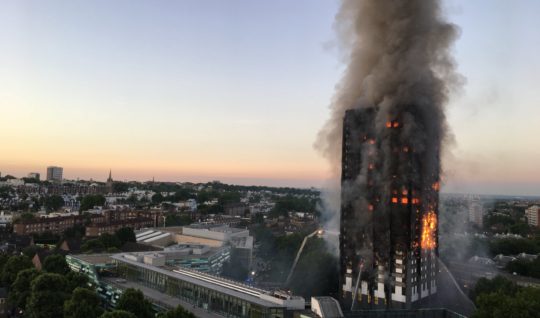 Grenfell Tower: How will it effect the fire industry?

The Grenfell Tower fire broke out on 14 June 2017 in the 24-storey Grenfell Tower block of public housing flats in North Kensington, West London, United Kingdom. The devastating aftermath of the Grenfell Tower fire caused 72 deaths out of 293 people recorded present in the building, including 2 who later died in hospital. Over 70 others were injured. Occupants of 23 of 129 flats died and 223 people escaped.

This LIVE recording was shot at this year's FIREX in London. It explores the Grenfell Tower fire and what this means for the future - will there be changes to legislation? Will Grenfell's after-effects change British Standards in fire protection? Will rules regarding evacuation of buildings need to change? What other effects will there be on the UK post-Grenfell?

With Councils, landlords, businesses and other public buildings under scrutiny, as well as the Grenfell Tower fire inquiry now underway, the lasting after-effects of the fire are being felt throughout the industry.

In this seminar, Ian Moore focuses not on the tragic Grenfell fire itself, but on the aftermath the disaster leaves in its wake.