The FIA and the UKCA mark

We have been in constant communication with the government and the relevant approval bodies over the last year voicing the concerns of the fire safety industry on the impact of implementing the new UKCA mark.

We, at the FIA, have been in constant communication with the government over the last year voicing the concerns of the fire safety industry on the impact of implementing the new UKCA mark. Thus far, we have sent several letters to Governmental departments, have voiced our concerns at many meetings with the Government and collaborated with Approved Bodies to provide valuable resources to the industry.

Rest assured this is a priority of the FIA. It is vitally important that the Government understands the impact that changing to the UKCA regime will have not only for businesses from the fire industry whose task it is to keep buildings safe; but also, for the thousands of business owners that rely on their buildings being compliant so that they can remain open. We have successfully lobbied to extend the transition period, whilst we are proud to have helped secure an extension, it is crucial that our members continue their efforts to implement the UKCA mark within the new timeframe.

The Department for Business, Energy & Industrial Strategy (BEIS) have produced new guidance in regard to the implementation of the UKCA mark.

A number of webinars on placing goods on the market in Great Britain are scheduled over the coming weeks, more information on which can be found here 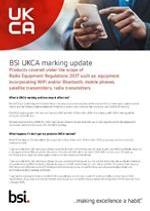 A guide to UKCA

This 5-page pdf covers all the basics you need to know about UKCA, from timelines to what it means for your business. It is essential reading for organizations previously with CE Marking, or those thinking that UKCA may apply to you. 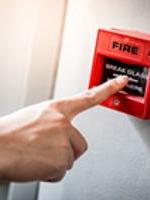 What does the UKCA mean for the Fire Industry?

In this webinar BSI take a deep dive into the implications for fire products; examining some of the pitfalls and providing guidance to navigate the new UK regulations. Please note: some dates may have been before a one-year extension was agreed by government in August 2021. 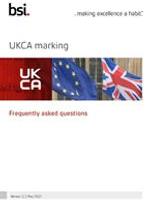 After seeing an influx of UKCA questions coming in over the past 18 months, BSI are in a strong position to answer these questions, providing you key insight. This document covers those most frequently asked questions and may well save you a great deal of time researching. 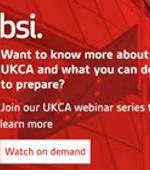 BSI has a range of upcoming and on-demand webinars to help you; these include webinars covering some of the more specific areas concerning  Northern Ireland, Supply Chains and Duties of Importers. 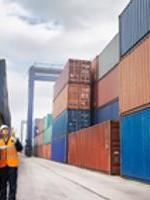 Duties of importers under UKCA

A key difference under UKCA, compared with CE Marking, is for organizations that import and sell on goods. Before, they were classed as distributors, whereas now they’re importers which puts a greater responsibility on them. If this applies to you, it is vital you know what is required.

Video: UKCA what you need to know

A short (2-minute video) which covers the key elements of UKCA including timelines, who it applies to, what it is and the relationship with CE Marking.

The Government have confirmed that the CE mark can be used until 1 January 2023.

Ian Moore, CEO at the FIA states: "We are proud to have worked collaboratively with the Government to highlight our industry's concerns with the implementation of the UKCA mark and the timeline that was previously suggested. We have been working with the overwhelming majority of our members through our UKCA Special Interest Group to discuss the impact of the UKCA mark and communicate their issues to the Government. This positive result comes after the extensive time and effort that has been undertaken by the FIA team on behalf of our members." (Further information on all that we have done over the last year can be found below.)

The Government have now confirmed that they will grant a one-year extension for UK products to continue using the EU’s “CE” safety mark - which is something that the FIA stated on 26th July 2021.

“Recognising the impact of the pandemic on businesses, the government will extend this deadline to 1 January 2023 to apply UKCA marks for certain products to demonstrate compliance with product safety regulations, rather than 1 January 2022,” the Department for Business, Energy and Industrial Strategy said.

In addition, we asked the MHCLG, who has confirmed that 'the deadline for the recognition of CE Marking to end has been extended for all goods covered under European new approach goods legislation i.e CPR, EMC, LV.

Therefore, the confusion on when to use the UKCA or CE mark for products that fall within a number of these regulations should now be minimised. Therefore, if placing products on the GB market manufacturers should now look to UKCA their products before that end date.'

1) The Government have confirmed that for CPR products the CE mark will remain a legal mark to be used in the UK after January 1 2022 – further information is required from the Government with a clear timeline for the required withdrawal of CE marking under the Building Safety Bill. For other CE marked products (LV & EMC) the guidance on the Government website applies - read here.

2) Products with the CE mark will continue to be placed and sold within the UK beyond 2021 under the current legislation, with further updates from the Government.

3) Following on from the previous advice given by the Government, the FIA continues to recommend that you use this extended timescale to carry on the process of transitioning your products to the new UKCA/UKNI marks alongside the required CE marking.

The Ministry of Housing Communities and Local Government (MHCLG) have recently released their plans for bringing the Building Safety Bill into the legislation.

This bill will allow them to lay secondary legislation that will give them the powers to end the recognition of the CE mark in England, Wales and Scotland; this means that the UKCA mark will be required in the near future in these regions. Northern Ireland will continue to use the CE mark or the new UKNI mark.

The overwhelming majority of our members, the wider fire industry and in fact many other industries in the UK are unclear on when they must have transitioned to the UKCA or UKNI marks by (or when they have to stop using the CE mark in England, Wales and Scotland by).

This is because the Government guidance on Using the UKCA marking states:

‘The UKCA marking came into effect on 1 January 2021. However, to allow businesses time to adjust to the new requirements, you will still be able to use the CE marking until 1 January 2022 in most cases.’

This has led many to believe that that using the CE marking in England, Wales and Scotland after 1 January 2022 would not be allowed.

However, in order for the Government to end the recognition of the CE mark, legislation has to be laid down to grant the relevant departments the power to do this. This legislation has not been able to be scheduled in the parliamentary timetable in time to meet the 1st January 2022 deadline – which is understandable given the unforeseen circumstances of the last 15 months.

This means that the Government will not be able to end the recognition of the CE mark in England, Wales and Scotland by January 1st 2022. Resultingly under current legislation, products can have the CE mark and be placed and sold in the UK.

However, questions still remain on when recognition of the CE mark will end. After consulting with the Government, it appears that there is no date set in stone and the Government will be releasing updated guidance in the coming months which will give industries a clearer timeline on when we will be looking to end the recognition of CE marking in England, Wales and Scotland.

The Government still intend to end the recognition of the CE mark at the earliest possible opportunity. It is likely that it will take a further 9 – 12 months for the Government to have the necessary powers to do so and then parliament has to pass this change – which could take an unknown amount of time.

We will continue to work with the Government on behalf of the fire industry to ensure that the transition to the UKCA mark is achievable, seamless and as painless as possible for all.

Our previous work with Government:

Our primary concerns are that (full letter below - 1):

As a result, we have requested on two occasions to the Government that (full letter below - 2):

Prior to Christmas, we received a response where the Government has stressed that (see full letter below – 3):

In 2021, the FIA UKCA SIG has been busy voicing our continued concerns to the Government. We wrote a very detailed letter on how the UKCA is and will continue to negatively impact the overwhelming majority of our members and the fire industry (see letter full letter below - 4). Unfortunately despite speaking to the UK AB like the government recommended and despite including hard evidence from our surveys, the Government responded with a letter filled with copy and paste responses and concluded with a factually incorrect statement to end the letter (see full letter below - 5).

As a result, of this unsatisfactory, we have written to Lord Stephen Greenhalgh, the Fire Minister, to request that the Minister assist us in explaining to the correct Government individuals the current and future damage that the unachievable timeline for transitioning to the UKCA mark will have on the fire safety industry and potentially the safety of the public (see full letter below - 6).

Our work with approval bodies:

We met with the previous chair of the UK Approved Body association in January of 2021 to let him know of our survey that we would put to the approval bodies asking how they would act as a collective with the transition to the UKCA mark. They said that he would help reword questions and provide clear answers where possible. This fell through from their side due to unforeseen non-work-related issues.

In the same conversation, they said on the topic of the approval bodies mutually recognising and acceptance of testing and certification that for them, as a collective body, to officially agree to act as a collection of UK bodies it would take until September 2021 because they have to elect a new chair, meet, create the document and agree to it. This would leave our industry 3 months to know how the transition would really work and would not give our members the flexibility they need

As a result of the two points above, we began pursuing other alternatives. One of these alternative ideas that proposed was self-certification, but this was just an idea and it was decided our best course of action was to launch a survey to our members and to the industry and relay the results to the approval bodies who we met with on Friday 26th February.

The meeting went well and the results of the survey were acknowledged by the approval bodies.

In our latest meeting (26/02/21) with the majority of the relevant UK Approved Bodies (UK ABs), we asked key questions that were answered clearly and provided much-needed clarity on the UKCA mark alongside the processes required to affix the mark.

We hope that this document should serve as a summary of that meeting and we hope it can allow the fire industry to make more progress in being able to affix the UKCA marking. This document has been made in collaboration with a well-informed UK Approved Body that has tried to answer the questions that have been put forth by FIA members.

Be sure to keep an eye on our website, social media and Focus newsletter for the latest updates.

Our first letter to the Government - 1

Our second letter to the Government - 2

Government’s response to us  - 3

Latest letter to the Fire Minister - 6