Bob Whiteley, member of the FIA/BAFSA Watermist group, has been awarded a Special Commendation at the 2014 BSI Standards Awards, the first of their kind.

He was nominated for his contribution to standards development in the field of fire safety whilst serving as a BSI committee member.

Recognised as one of the world’s foremost experts in foam and water mist extinguishing systems, the nomination statement described him as speaking ‘from a strong technical background and with the wish to ensure that the output of the committees is both technically correct and workable in practice’.

It went on to say that Bob’s commitment to industry and consumer-focused standards was ‘a key factor in his success in his committee work’ and that his ‘technical knowledge and ability to understand each participant’s viewpoint’ made him an excellent chair and convenor and gave him the ability to make hard decisions if necessary. 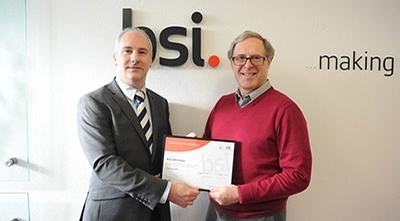