This Fireside Chat with Chandru Dissanayeke, Director, Building Safety Reform at the Ministry of Housing, Communities and Local Government (MHCLG). This interview touches on leaving a legacy of supporting others, finding the balance between work and family life and how the FIA can help professionalise the fire industry. 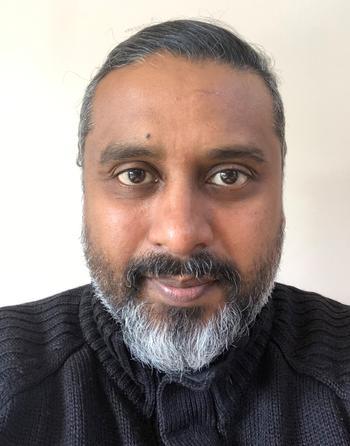 Intro: Chandru Dissanayeke is the Director, Building Safety Reform, in the Ministry for Housing, Communities, and Local Government. He is responsible for implementing the reforms to the building system following Dame Judith Hackitt’s review of Building Regulations and Fire Safety. During his career in the Civil Service, he has enjoyed a variety of policy roles across five government departments. Prior to joining the civil service, he had an eclectic career delivering projects and programmes within the financial, technology, manufacturing, and entertainment industries.

In lots of different ways.  Personally, I’ve been affected by deaths in the family, by sickness not being able to visit family when they’re in hospital as well.  So, all of that has been quite difficult.  Very early on during COVID-19 just before the first lockdown I caught it and was in quite a bad way.

Fortunately, I didn’t have to go to the hospital, but I was pretty much off and useless to everybody for about 3 weeks.  I found that the after-effects of COVID-19 have lasted longer and has made me build regular exercise into my routine, which is good. So some personal positives coming out of it in that regard.

On the one hand, it has been a positive experience in many respects.  It’s given me more time at home to see the kids and to spend time with the wife, which I would never get as I usually get in late and am exhausted after my daily commute. So, not doing the commute has been hugely positive.  I’m incredibly blessed that I live in a house with a garden and have a separate office, so I’ve been incredibly blessed in terms of my personal circumstances compared to others, but I never take my eye off the fact that I’m incredibly blessed and fortunate.

On the other hand, it has not been nice to not be able to meet colleagues or friends. I have had to be more purposeful as a leader because you don’t have those moments of serendipity when bumping into people or having a conversation at the water cooler. So, I have been more purposeful in creating those moments.

One that pops into mind immediately is the Shawshank Redemption.  I think it’s just a lovely story beautifully told with great actors and great acting.  Morgan Freeman's voice is just so soothing, but there is something quite redemptive about it as a movie, which I quite like.

I get annoyed with myself when I don’t live up to my standards which I expect from myself, so when I’m not kind to other people or when I’m a bit sharp with people, I get quite upset with myself.  That’s the thing that annoys me the most.  I annoy myself the most.

There’s two decades that come to mind and their both living in a different country.  So, one would be living in India in the tenth century and seeing how India was an interesting nation, full of different religions and different people and I would have enjoyed that.

Then the second era is probably the 12th, 13th or maybe even 14th century Middle East or that channel from the Middle East to upper parts of Africa into Spain.  Just seeing the trade routes develop and again, the intellectual stimulation of different people forming different views in that area, I think I would have found it incredibly fascinating.  I would have loved to have seen what that was like, but of course, with all of those I would have wanted to have money, be rich, but not too rich as that would make me a target.

It’s a hard one for me because I’m a civil servant really, first.  So, I’d probably be just working in another area of Government.  But, if I wasn’t doing Government work or the sector work, I’d like to think I would be involved in the entertainment industry in some form or another, behind the scenes.  Creating content that others are stars in.

I’m listening to a whole heap of things at the moment, I don’t settle on one.  One individual I’m particularly fond of is ‘Sleeping at last’.  He’s my go-to whenever I want to relax.

I can listen to music whilst working but particular types of songs, not all songs.  Some songs just make me want to get up and dance.  So, it needs to be particular types of music.  I have an ability – which annoys my wife – to switch the world off around me and just be completely consumed with what I’m doing.

I think it would be Nelson Mandela, Mahatma Gandhi and Jesus Christ.  I’d be the one serving and listening.  I wouldn’t be talking; I would just be serving them whatever they needed while listening to the three of them having a chat.

A wise man learns from the mistakes of others.

I’d probably be relatively practical and take a knife, that would be the first thing and some flint.  It’s all about survival.

I really love Dickens and I really like all Dickens.  I love the way Dickens writes and I also enjoy the way he describes the society in which he lives in and how that can have a positive impact in driving social change.  The one that I really love is David Copperfield, I think it came into my life at just the right time. Dickens creates a character in David Copperfield that he can be anyone’s friend and in a sense he became my friend at a point in my life where I had moved out of central London, so I was doing a lot of commuting to get to school, he helped my enjoy it.

A wolf I think, wandering the plains exploring the wonderful world. Very happy alone, while still being part of a pack.

The gift of life, I’ll always be grateful to my Mother and Father for that.

I wouldn’t mind being able to fly, that would be cool wouldn’t it?  To be able to levitate and to fly about everywhere, it must be easier than walking.  Just fly around the block.

It’s interesting because we just assume that flying would be easy, what if it was more tiring than walking and running even and then if we had the power to fly, would we even bother to fly?  Or would we just prefer to walk everywhere?  I don’t know.  I think I’d like to fly as long as it was easy.

About 6.45am.  It varies since I don’t have to commute into Westminster. If I was Commuting, I’d usually be in the office by 8am but I probably would have worked a bit at home first.  The commute is about the same as most people living in London… where everything is about an hour. It is tiring and can be annoying it’s always packed.  When we return, I like to think I would go back as soon as London is open, but make use of hybrid working, probably work from home 2 or 3 days a week.

It’s similar and different everyday.  The similarity is the constant meetings. It’s unbelievable the amount of back-to-back meetings we all seem to have.  The difference, the meetings are always on a varied range of topics which are huge in breath, which makes it interesting.  It can be from internal departmental issues to wider Government policies to driving forward work in relation to legislation to having discussions on reform to talking through project and programme management to understanding commercial constructs to having discussions with banks and insurers to having discussion with construction companies or experts, so it’s hugely varied on any given day.

I have found that being online enables me to pinball from one meeting to another one, finding time to use the toilet is the challenge.  As far as productivity decreasing when going back to normal, I think productivity is an odd concept which we sometimes misunderstand, so the idea that we do more as being productive, I don’t think is necessarily true. So being more effective for less input in my mind is productivity. Sometimes you can be more effective when you are meeting groups of people together or just having one of those moments of serendipity I described earlier, or even thinking about something while doing something else.

Since lockdown, I’ve been busier, but I question whether I’ve been more productive.  I think that I am productive, I don’t think it has decreased but the context in which I’m productive has changed, I worry we’ve tried to maintain old expectation and operating with new ways of working.  This hasn’t been healthy and at some point, as a society, I think we will need to just pause, check and test how we want our new work environments, expectations, and operating principals to work in a way that works for us as people; as opposed to how people think work should be done – based on outdated norms.

The opportunity in terms of this sector being able to become better.

So, what I would really like is the traceability of products and work.  The ability to just take a window frame or a door and scan it on your phone and know everything about that and who installed it.  I would love something like that to exist on all buildings.

In my mind I don’t separate work and family in the traditional sense.  I think life is life and it all has to work together.  So, my big realisation about 11 years ago was that for me to be a great father and a great husband I also needed to do my best at work. In the same breath being good at work means I also need to give my best at home.  I don’t separate them both.

So, I try to balance them, not in the sense of after this time I do this but in the view of seasons and in the view of attention in terms of what people need or what the programme or the work needs.  When I find that work becomes overwhelming and it’s taking me away from family life for too long I then might take a break and try to gain perspective because it’s something I’ve done wrong, I’ve allowed work to interfere and interrupt in that way for too long.

In terms of priority though my family always come first. That is the only place I think I am irreplaceable.

My family matter the most to me.

On a professional front it’s enabling us all to leave a legacy for future generations that we can be proud of.  I like my legacy to be about individuals. I’d like people to remember me as somebody who helped them and always sought to do the right thing.

The FIA can help professionalise the sector and organise it in a way that it can be its best.  It can provide leadership and enable it to become the best sector it can be, continuously improving.

If you’ve got this far you need to find something more interesting to do with your life.

*All answers given are not reflective of the FIA views and thoughts and are that of the individual who was interviewed.