Stephen-Remell Coleman is Watch Manager B with the Fire Brigade and Transport Liaison Officer seconded to the Crossrail project.

Coleman, who conducts fire assurance assessments on all London-based Crossrail sites, spoke to IFSEC Global about his role in Europe’s biggest construction project, how he conveys the importance of fire safety to the workers on site and suggests reasons why to date there have been zero major fires during construction.

IFSEC Global: Hi Stephen. Please give us an outline of your role in the Crossrail project…

Stephen-Remell Coleman: For want of a better word I’m the one-stop shop for all things Fire Brigade, so anything to do with our fire safety legislation team, they get on to me and I arrange a meeting between the two parties to facilitate where issues come up.
When it comes to safety and security there’s a police officer, who sits right next to me, so if any incidents come up then she lets me know or vice versa and we action it appropriately.

IG: It’s an absolutely enormous project to work on…

SRC: It’s a three-stage construction project. You have the stage where they dig a series of holes and tunnels underground. You have the electrical and mechanical planning stage, then stage three is testing of the running rail.

For us stage two is the riskiest stage as that’s where you have the fire loading and flammable materials, even though they try to mitigate it as much as possible.

IG: What problems have you dealt with in your role?

SRC: When they first started doing the fire assurance assessments I found that with the HAKI stairs – the temporary stairs they use up and down the shafts – they weren’t sure whether the netting used was fire rated, and for me that was a big no-no, because that’s your main port of access/egress.

Since that report came out the rest of the sites caught wind of that, it was put out through the relevant channels and now all the netting across the project is fire-rated.

The second I walk on to the site you get a flavour of what to expect because you’ll look at the signage, their muster points, which some of them call RVPs, which I’ve been trying to educate them into not doing because RVPs for the blue light services – that’s where we keep all our resources.

So if they’re telling people “in an emergency you need to go to this RVP”, that’s where we’re turning up and we don’t want our appliances and their employees turning up in the same place for obvious health and safety reasons.

IG: What are you looking for when you’re doing your fire assurance assessments? 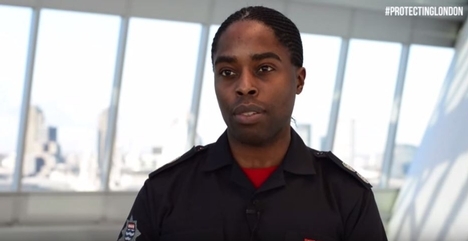 SRC: When I go on site I’m looking at the basics: access/egress, firefighting water that we can use to safely put out a fire and communications, which is a big one for us, because that’s where we have our dedicated subsurface working channels.

We want to make sure they have these communications in place as early as possible. As part of my fire assurance assessments I ask their fire wardens to tell me what they believe their roles are and sometimes there’s a bit of a discrepancy between their roles and what actually happens on site.

Most fire wardens in the event of an incident go from floor to floor making sure they clear out all the people, prioritising the people who are immobile or hearing impaired, making sure everyone’s out. They take a register and pass that register on to the LFB incident commander who can check off a list and see if anyone is missing, which will inform our plan.

Some fire wardens have been given the added role of making sure that all the extinguishers are in test date.

IG: And what do you do to make sure staff are aware of the dangers and their responsibilities?

They have five golden rules at Crossrail which all companies are supposed to adhere to. When I go down to site I like to tell stories of when I’ve been at incidents and how basic health and fire safety rules haven’t been followed, leading to these incidents – and it really hits home.
And the people on site say these stories are more effective than any Powerpoint presentation. So Stepping Up really does work and heightens people’s awareness.

IG: And how do you assess whether the message is getting through?

SRC: There’s a system at Crossrail called REVO where they look at all incidents and accidents that happen – even the near misses.

I saw a trend in small fires in designated smoking areas. What we found was because they had their metal bins next to their domestic bins people were putting cigarettes in the domestic bins, having a drink and putting their plastic cups in there.

You want to change their mentality at the outset so they don’t take that down into the tunnels and have bigger incidents down there. If we can mitigate it at that level then we’ve done our job.

IG: What’s the record on fire safety so far?

SRC: Luckily, and it’s because of the collaborative work between Crossrail and the LFB, there haven’t been any major fires in the tunnelling area. And I think that’s because of our proactive approach: everything we can mitigate, we do mitigate.

Where they have involved the Fire Brigade in the design stage they use the best fire-retardant materials. So every stage of health and fire safety that Crossrail and the LFB could mitigate, they have mitigated, and that is being reflected in the small number, and small size, of fires.

Find out more about Crossrail and how other iconic London buildings are protected by visiting IFSEC Global.