History of the FIA: Our first newsletter

At the 13th AGM on 12th November 1929, our Chairman [from Pyrene Co] welcomed new members, but regretted that there weren’t more attending as several had joined during the year.

As membership had increased, someone suggested that we should send a periodical bulletin out to members, keeping them informed of the discussions held almost monthly by Council. The idea of a bulletin was often repeated in the early years, when the idea was sound but the technology was not up to it. 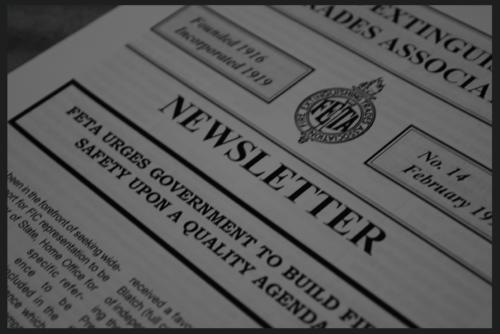 At first, a typewriter with a maximum of about 4 legible copies would have been used. It was January 1931, over a year later, when Bulletin No 2 was written. In 1937 we bought a duplicating machine, a revolving drum which was turned by a handle to run off copies one at a time from a typed original.

We replaced this in 1958 for £30 (less a trade-in on the old one), and it lasted us until 1971. Copies would have been posted to members. Today we bombard members with information and under agreement try and condense this to a once a week ‘Focus’ email.